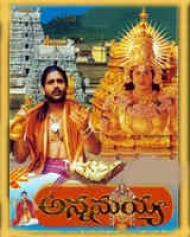 History
Release Date : 22 May 1997
Cast : Nagarjuna Akkineni, Ramya Krishnan
Director : K.Raghavendra Rao
Synopsis
Annamayya movie is the cinematic of life of the famous composer, Annamacharya. In which, Lord Vishnu (Suman) listens to requests from his consort Lakshmi (Banupriya) that there weren't many people singing songs in praise of the Lord in Telugu language.
In response, the Lord sends Nandaka (His sword) to be born as Annamacharya to a childless couple in Tallapaka village, Kadapa District. Growing as a normal young man.
Annamayya (Nagarjuna) is in love with his 2 cousins Timakka and Akkalamma (Ramya Krishna and Kasturi) and thinks that his cousins are the most beautiful creations of god.

Lord Vishnu appears in front of Annamayya in disguise and accepts a challenge from him to show someone more beautiful than his cousins GOD in the form of Lord Venkateswara in a...