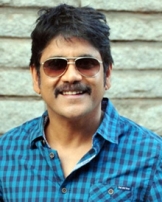 Akkineni Nagarjuna is a popular Telugu film actor and a successful producer. He is the son of veteran actor Akkineni Nageswara Rao, who is very respected for having successfully done multiple films over the last four and a half decades. He is famously called as "KING Nagarjuna".

Nagarjuna was born to Telugu cinema actor Akkineni Nageswara Rao and Annapurna Akkineni. Nagarjuna did his schooling at Hyderabad Public School and later went to Ratna Junior College to do his intermediate.

After that, he went on to do mechanical engineering at the College of Engineering in Guindy, Chennai. He later attended the University of Louisiana, Lafayette, where he received his master's degree in automobile engineering.

Nagarjuna has married twice. He is currently married to Amala, who was a popular actress in the Tamil and Telugu film industries. He has two sons. Naga Chaitanya from his first marriage, and Akhil Akkineni from his second marriage.

His first movie, Vikram, was released on May 24, 1986, and was a remake of the Hindi film Hero, starring Jackie Shroff. After acting in four films, he acted in Majnu as a tragic hero; similar roles were known to be his father's forte. He co-starred in the film Collectorgari Abbayi with his father. His first big hit was Akhari Poraatam, co-starring Sridevi, which ran for 100 days in 12 theatres.

Geethanjali, a love story directed by Maniratnam, followed by Shiva an action film directed by Ram Gopal Varma, was highly successful and established him as one of the top heroes. During this phase of his career, he relished working with new directors such as Ram Gopal Varma in order to recreate his screen persona and enjoy certain creative energy through the fresh approach of these young directors.

He also made his Bollywood debut with the Hindi remake of Shiva. Movies such as President Gari Pellam and Hello Brother gave him the status of a mass hero. After that Ninne Pelladutha, directed by Krishna Vamsi, appealed to a broad cross-section of people, both young and mature. The movie was a big success at the box office.

Later, he took up the challenge of portraying Annamacharya, the legendary singer/poet of medieval times, in the movie Annamayya. It ran for 100 days in 42 centers and is one of the biggest hits in Tollywood. He won the National Award for this role in the Special Jury category.

In 2004, Nagarjuna had two releases, Nenunnanu and Mass, with the latter going on to become a hit. In 2005, Nagarjuna had one release, Super. Super didn't reach up to the expectations. Sri Ramadasu, a period film based on the life of great saint-composer Ramadasu directed by K. Raghavendra Rao, and Boss, I Love You were released the following year.

He never hesitated to experiment when he produced films. He gave a chance to a newcomer who had no prior experience in movies to direct him. The newcomer didn't disappoint him and went on to become one of the finest directors in the Indian film industry.

The director is none other than Ram Gopal Verma. Nagarjuna is also known for his swiftness in decision-making. After seeing a 10-minute rush of the director's film Gulabi, he agreed to work with Krishna Vamsi. His decision proved to be bang on target, as they made the blockbuster movie Ninne Pelladutha.