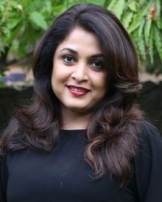 Ramya Krishnan is a successful multilingual actress in commercial Indian cinema. She also holds a rare record of acting in five languages, namely Telugu, Tamil, Kannada, Malayalam, and Hindi. She has played such diverse roles as a glam doll, a caring wife, a devoted mom, an arrogant vamp, and even a goddess.

The south Indian actress has a long career spanning over two decades and more than 200 films to her credit. She has portrayed a wide range of roles, from that of an innocent village belle to that of a hip and happening female.

Ramya Krishna was born on September 15, 1967, in Chennai, Tamil Nadu, to a Telugu family whose mother tongue is Telugu. She is the niece of Cho Ramaswamy, an actor, and outspoken politician. She had initial training in Bharathanatyam and Kuchipudi dance forms and has given many stage performances.

The actress married noted Telugu film director Krishna Vamsi on June 12, 2003, and has since settled in Hyderabad. She gave birth to a boy named Ritwik Vamsi on February 13, 2005.

Ramya Krishna started her acting career at the age of 13 and has been in the field for 19+ years. She first played the lead role in "Vellai Manasu" in Tamil opposite Y.G. Mahendran. She was in the 8th grade when she acted in her first film.

Ramya Krishnan's first Telugu film was Bhalae Mithrulu. Sutradharulu, Kasinadhuni Viswanath's 1987 masterpiece, gave Ramya her first major break as an actress. Under the direction of K. Raghavendra Rao, Ramya Krishnan established herself as a "star" in the Telugu film industry.

She worked with all the major heroes of yesteryear, like Akkineni Nageswara Rao, Nandamuri Taraka Ramarao, Krishna, and Sobhan Babu, and also with the next generation of heroes, like Chiranjeevi, Balakrishna Nandamuri, Venkatesh, Akkineni Nagarjuna, and Jagapathi Babu. Though a trained Bharatanatyam dancer, she never really got a chance to explore that facet of herself.

Her Tamil film Padayappa (Narasimha in Telugu) brought her recognition and fame not only in South India but also internationally in Japan, Singapore, London, and Paris. Her role in Padayappa was perhaps the best in her career and disproved her critics, who'd said that she was a mere glam doll.

Ramya has also enjoyed success in Kannada movies. In fact, one of her early film roles was with Vishnuvardhan in the Kannada film Krishna Rukmini. Her biggest Kannada hits include Gadibidi Ganda, Mangalyam Thanthunanaena with Ravichandran, and Raktha Kanneeru with Upendra.

She also hosted a number of entertainment shows on Vijay TV, including Jodi Fun Unlimited and Bigg Boss Jodigal. On occasion, she also made appearances in Tamil Bigg Boss episodes when Kamal Hasan wasn't present.