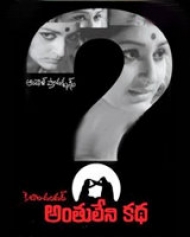 Her father abandons the family and becomes a saint. Her brother not only does not take responsibilities, but also creates additional problems for her.

She has a longtime boyfriend, who wants to marry her, but she doesn't because of her commitment to her family. His eyes now wander to Saritha's widowed younger sister (Sripriya) who reciprocates his feelings.

Saritha, after reading her boyfriend's love letter to her sister, arranges for them to get married, thus giving up her chance of having a life with him. She eventually accepts a...