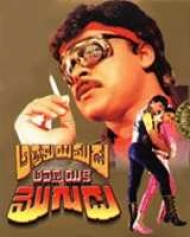 U | Action Drama
Release Date : 14 Jan 1989
Cast : Chiranjeevi, Vijayashanti
Director : Kodandarami Reddy
Synopsis
Athaku Yamudu Ammayiki Mogudu is action drama based movie in which, Kalyan (chiru) is an unemployed living in the city with his roomeet (Brahmanandam) with futile efforts in search of jobs.
Sasirekha (vijayasanthi) is a medico who gets Kalyan into jail due to a mis-understanding and laters falls for him.
Kalyan though reluctant accepts her love for her sincerity.Kalyan goes to home after recieving a letter from his mother (annapurna) and knows that his sister (varalakshmi), who is working in a big factory owned by Chamundeswari (Vanisree), is in love with her elder son.
He comes to know from hemasunder that he infact loves her and is afraid to accept before his mother.Kalyan comes to know that Sasirekha is the daughter of Chamundeswari and he decides to teach her a...