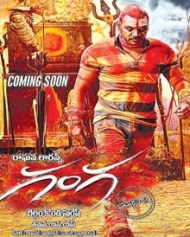 Raghava Lawrence began work on the third installment to the Muni franchise, titled Ganga in 2012. He had said that he had two different storylines for the sequel to Muni. Taapsee was roped in to play the female lead.

Anjali was signed up for a cameo role, but she was later replaced by Nithya Menon. It was reported that Lawrence would introduce his brother Vino in the film, who would dance in one song. Lawrence was said to have six different shade roles.

Pooja Ramachandran was roped in who stated that she...