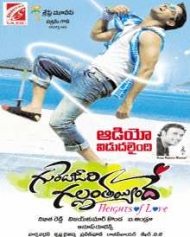 U/A | Romance
Release Date : 19 Apr 2013
Cast : Nitin, Nithya Menen
Director : Vijay Kumar Konda
Synopsis
Gunde Jaari Gallanthayyinde is a romantic comedy entertianer movie in which, Nitin appears as a software engineer Karthik, who thinks he is the smartest guy on the earth, but he turns out be the biggest fool at the end.

There are four central characters played by Nitin, Nithya Menon, Isha and a friend, but until the end, the viewers can not figure, who is wooing who. Nitin is a self-confessed fan of Pawan Kalyan and the the title Gunde Jaari Gallanthayyinde is taken from the lyrics of the song 'Dil Se' from his Gabbar Singh.

He has also used the remix version of 'Nee Manase', a hit number from Pawan's Tholi Prema. Talking about the track, the actor says that it is going to be one of the main highlights in the movie.