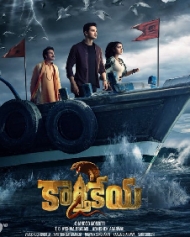 Karthikeya 2 is a supernatural thriller movie written and directed by Chandoo Mondeti. The movie casts Nikhil Siddharth and Anupama Parameswaran in the main lead roles along with Anupam Kher, Srinivasa Reddy, Viva Harsha, Adithya Menon, Praveen, Satya, Tulasi, and many others have seen in supporting roles. The music was composed by Kaala Bhairava while the cinematography and editing were done by Karthik Ghattamneni. The film is produced by Abhishek Agarwal, TG Vishwa Prasad under Abhishek Agarwal Arts, People Media Factory banners.
Story
Dr. Karthikeya Kumaraswamy is a young man who researches new things. A doctor who believes in myths and legends unless facts and logic are visible to his eyes. On one occasion, he goes to the ancient epic city of Dwarka along with his mother (Tulsi) and friend Ravi (Satya). While visiting Dwarka, he gets caught up in the murder case of an archeological researcher.
Why did Kartikeya, who did not believe in Gods, go to Dwarka? What conditions did Kartikeya face in Dwarka? How did he get stuck in the murder case in Dwarka city? Why did the Abhira tribe of Dwarka chase Kartikeya? What was the relationship with Mugdha (Anupama Parameswaran) in Dwarka? Why does Dr. Shantanu (Aditya Menon) target Karthikeya who continues to hunt for treasure deposits? What is the importance of Dhanwantari (Anupam Kher) in this story? Karthikeya 2 is the answer to these questions.
Release Date
Karthikeya 2 movie was released in theaters on August 12, 2022.