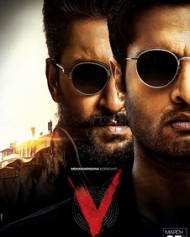 V movie is a romantic thriller directed by Mohankrishna Indraganti and produced by Dil Raju. The movie cast includes Nani, Sudheer Babu, Nivetha Thomas and Aditi Rao Hydari are in the lead roles. Amit Trivedi scored music.
Story
The film revolves around a super stylish cop Adithya (Sudheer Babu) who is bestowed with the gallantry award of the year. His life takes a steep turn after a ruthless killer Vishnu (Nani) challenges him and his capability as a police officer. One after the other, the killer takes the lives of several people starting from Adithya's colleague Prasad. The former leaves certain clues and riddles on the foreheads of the dead to make the hide and seek game between the duo interesting.
Apoorva Ramanujam (Nivetha Thomas), a wannabe writer and also a fan (later becomes girlfriend) of Adithya helps him solve a few puzzles of the merciless killer. Later, it is revealed that Vishnu was an Army officer and an expert in an anti-terrorist operation who was happily married to Saheba (Aditi Rao Hydari). What made him take the rugged and bumpy path in life that he became the most-wanted killer? Who wins the game at the end? Adithya or Vishnu? Well, the movie answers all the questions as it unfolds slowly yet steadily.
Release
V movie directly released on Amazon Prime Videos on Sept 5th.