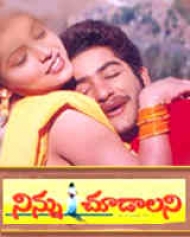 Venu (NTR) is the teenage grandson of Siva Reddy and Siri (Raveena Rajput) is the granddaughter of Sahadeva Reddy. Venu happens to see Siri on the day of Holi and falls in love with her at the first sight.

He gets hold of a photograph of her and then uses her photograph to put up a hoarding in Abids area asking her to call up his number. The parents of Siri notice their daughter's portrait on the advertisement of Siva Reddy sweets. The rivalry between Siva Reddy and Sahadeva Reddy intensifies.

Siri falls in love with Venu, since she likes the kind of attention he gives to...