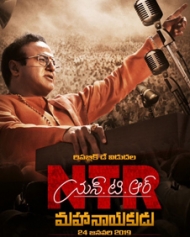 NTR Maha Nayakudu movie is a biopic of legendary actor and politician Nandamuri Taraka Rama Rao and it is directed by krish under Sai Korrapati production while M. M. Keeravani scored music for this movie.

Nandamuri Balakrishna playing the role of NTR in this movie.

NTR Mahanayakudu revolves around NTR's political life, highlighting how the mass leader survived a coup by Bhaskara Rao and reclaimed the CM's chair. The film also touches upon the bond between NTR and his ailing wife Basavatarakam.