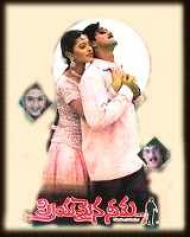 Romance
Release Date : 21 Feb 2001
Cast : Tarun, Sneha Prasanna
Director : Balasekaran
Synopsis
Priyamaina Neeku is an romantic love story in which, Ganesh (Tarun) is a carefree college youth whose life revolves around friends and doing good deeds for them and upsetting his father (Bharani).

One day he fumbles upon a Red diary in his father's auction shop. It is a dairy left behind unknowingly by Sandhya (Sneha). The entire first half is narrated through the diary in this film. Sandhya is staying in the house opposite to that of Aishwarya (Jhansi), who is the sister of Ganesh.


Sandhya falls in love with Ganesh after listening to his melodious guitar play. But Ganesh is unaware of her love and he never uses to interact with her. She is also a shy girl, who never let Ganesh know about her feelings.

Sandhya's father gets transferred to Vizag....