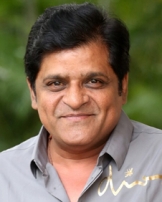 Ali is a South Indian actor who has acted in more than 800 films in Telugu and Tamil and in the Bollywood film industries.

Ali was born in a poor family in Rajahmundry, Andhra Pradesh, India. His father was a tailor and his mother was a housewife. Ali had developed a passion for acting since childhood, so when he heard that director Bhagyaraj was looking for new child artists to act in his movie Seethakoka Chiluka, Ali went to Chennai and attended the screening at Bhagyaraj's office. Bhagyaraj was pleased with Ali's performance and gave him his first film role.

As a child artist, Ali had acted in a variety of movies but as he grew older, he was no longer suitable for child roles. He held on to the film industry in Chennai and waited for a breakthrough role. Ali started his second career in Tollywood as a comedian.

It was director S. V. Krishna Reddy who gave him the much-needed break with comic roles in his movies. Even though no suitable roles were present, S. V. Krishna Reddy used to create new roles for Ali. Reddy suggested Ali should have his own style of dialogue delivery. Ali developed his own style, which was popularly known as Chaata. This was developed with Ali's own way of pronunciation. His mother tongue is "Malayalam". His ancestors are from Kerala.

Director S. V. Krishna Reddy gave him as a breakthrough role in the Yamaleela film. He is a regular actor in Puri Jagannadh's movies.