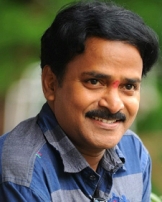 Venu Madhav is a popular Comedy Actor in Tollywood born near Kodada (Andhra Pradesh). He has acted in many movies in Telugu, Tamil and Malayalam languages. Besides an actor, he is a well-known mimicry artist. His first break into big screen was from S.V. Krishna Reddy in the film 'Sampradhayam', he also acted as a hero in Hungama.

He is also a television anchor, who has hosted several popular programs on various Telugu channels. Contrary to popular belief, Venu Madhav is not related to Nerella Venu Madhav, the Padmashri award-winning mimicry artiste.

He was arrested for abusing his wife and then released. He has acted as a hero in movies such as Hungama, Bhukailash-ekaram 50 kotlu and Premabhishekam (2008).

Venu Madhav passed away on Sept 25, 2019. He was under treatment for Kidney failure and Liver related issues in Yashoda Hospital.