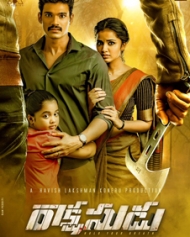 The core plot of Rakshasudu revolves around a police officer named Arjun Kumar, who is also an aspiring filmmaker. He tries to unearth the mystery surrounding a series of incidents that happen in his city with the help of the research that he had done for penning a film's script.