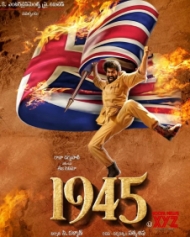 1945 is an Indian period film directed by Sathyasiva. The movie casts Rana Daggubati and Regina Cassandra are in the lead roles along with Sathyaraj, Nassar, Kaali Venkat, Saptagiri, Sampath Ram, Leesha Eclairs, and many others are seen in supporting roles. The music was composed by Yuvan Shankar Raja while cinematography was done by Sathya Ponmar and it is edited by Gopi Krishna. The film is produced by S. N. Rajarajan under K Productions banner.