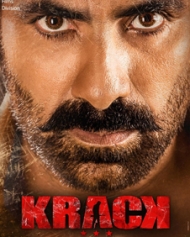 U/A | 2 hrs 34 mins | Action Romance
Release Date : 09 Jan 2021
Cast : Ravi Teja, Shruti Haasan
Director : Gopichand Malineni
Synopsis
Krack is a action entertainer movie directed by Gopichand Malineni. The movie casts Ravi Teja​, Shruti Haasan are in the main lead roles along with Samuthirakani, Varalaxmi Sarathkumar, Ravishankar P and many others are seen in supporting roles. The Music composed by Thaman S while cinematography done by G.K. Vishnu and it is edited by Naveen Nooli. The film is produced by Tagore Madhu.
Story
Veera Shankar (Ravi Teja) is a Krack fellow, who does not like the word 'background' from anyone, he will not leave anyone until he sees their end and does not tolerate injustice. He goes into three lives like Terrorist Saleem, Katari Krishna and Kadapa Reddy. What happend next forms the rest of the story.