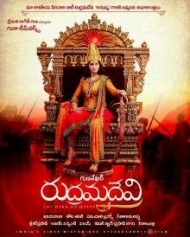 Rudramadevi is an first Indian 3D historic film, simultaneously being produced in Telugu and Tamil languages. The film is directed by Gunasekhar. In which, Anushka Shetty, Allu Arjun and Rana Daggubati are playing the main lead roles along with Krishnam Raju, Prakash Raj, Adithya Menon, Nithya Menon, Baba Sehgal, Catherine Tresa and many more are in supporting roles.

The film's soundtrack and background score were composed by Ilaiyaraaja and the art direction is handled by Thotta Tharani. Neeta Lulla is designing the costumes. The film has completed the production and is in post production stage.

The story takes off with the narration of Italian merchant traveler Marco polo (Gary Tantony) about the legendary story of Kakatiya emperor Ganapatidevudu(Krishnam Raju), his dynasty and his daughter Rudhramadevi (Anushka).

Rudhramadevi is raised as a male to protect the interests of Kakatiya dynasty and was married to Mummidamma (Nithya Menen). Hariharadeva (Suman) and Murarideva (Adithya Menen), the cunning cousins of Ganapatideva plans to dethrone him while Mahadeva Nayakudu (Vikramjeet Virk), the arch rival of Kakatiya dynasty waits for a chance to go on a war.

On the other hand, Gona Ganna Reddy (Allu Arjun), a bandit in the Kakatiya kingdom turns against Kakatiya rulers and fights for the poorer sections of the kingdom. How did Rudhramadevi face all these problems of Kakatiya dynasty with her prowess forms the rest of the story.