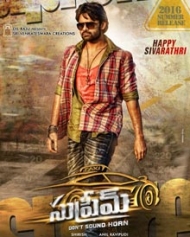 Supreme movie is a action entertainer movie written and directed by Patas movie fame Anil Ravipudi and produced by Dil Raju. Sai Dharam Tej and Rashi Khanna are playing the main lead roles along with Jil fame villian Kabir Singh will be seen in a negative role.

Sai Karthik scoring music for this movie. Sai Dharam Tej will be playing a cab driver role in the film.

Balu (Sai Dharam Tej), a cab driver falls in love with Bellam Sridevi (Raashi Khanna), a police inspector at the first sight and just when he thinks his life is as simple as that, he gets to meet an orphan boy, Rajan.

What role does the little boy plays in the life of Balu and how a cab driver ends up saving the livelihood of thousands of farmers, forms the rest of the story....