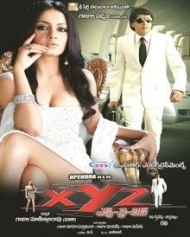 U/A | Romance
Release Date : 18 Oct 2013
Cast : Upendra, Celina Jaitley
Director : Ravi
Synopsis
XYZ is a dubbed version of Kannada movie Srimath and its original remake version of Hindi movie Aitraaz. The story revolves around the character Upendra a successful businessman has everything going for him, including a lovely wife Priyanka. Just when he thinks things can't get any better, Celina Jaitley his ex-girlfriend, now the boss's wife walks back into his life and she wants Upendra.

After he rejects her sexual advances, she accuses him of rape. But he soon turns the tables on Celina Jaitley and uses her for sexual harassment along with the help of his wife Priyanka. Gajula Manikyala Rao brought the Telugu dubbing rights for this movie.