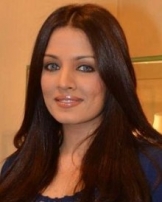 Celina Jaitley, born 24 November 1981, is a Bollywood actress. She was crowned Miss India in 2001. She has appeared in several movies and music videos (including the Bombay Vikings' "Zara Nazron Se Kehdo" video).

Jaitley was born to a Punjabi family in Kabul, Afghanistan.
Daughter of an Indian army officer, Celina Jaitley had to change 13 schools due to the frequent transfers of her father; due to this reason Celina Jaitley grew up in different cities and mostly spent her time in Kolkata, India.

Jaitley was raised as a Hindu. She has said that when she was young, she wanted to join the army herself, either as a doctor or a pilot. She graduated with a degree in commerce from Indira Gandhi National Open University. Celina Jaitley's mother is a child psychologist, as well as a former beauty queen. She has one brother, who is serving in the Indian army.
Celina Jaitley was into a marketing job in a cell phone company in Kolkata before she decided to participate in a local beauty contest. Jaitley was a finalist in the Miss Universe 2001 contest. In addition to her title of Miss India, Celina has won the Miss Margo Beautiful Skin, Indiatimes Surfer's Choice and MTV's Most Wanted award.

In 2003, she made her debut in the movie industry with Feroz Khan's Janasheen.