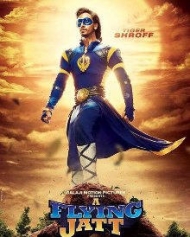 A Flying Jatt is set in the backdrop of the Punjab province, where a young and energetic Tiger Shroff who is leading a simple life with his parents at his middle class home, ends up getting superhero powers and things go helkter skelter from then on. Not knowing what's happening with him, Tiger gets terrified and tries to experiment in flying and fighting but ends up being a laughing stock for himself. The superhero here is afraid of heights, fire and gets terrified by various other things, but his intentions are good and wants to safeguard his city from every evil.
Cast
Crew
Remo DSouza
Director
Ekta Kapoor
Producer
Shobha Kapoor
Producer
Sachin Jigar
Music Director
Critics Review
Show More
Photos
Songs
Music Director: Sachin Jigar
News
User Review
WRITE YOUR REVIEW
Show All
A Flying Jatt Comments
In Theaters Now
Upcoming Movies
Bollywood Movies Box Office Collection Updates