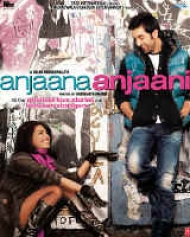 Comedy Romance
Release Date : 01 Oct 2010
Cast : Ranbir Kapoor, Priyanka Chopra
Director : Siddharth Anand
Synopsis
Anjaana Anjaani (Anjana Anjani) movie is a romantic comedy, where Priyanka is playing a character based in San Francisco, while Ranbir is essaying the role of a New York City boy. They meet in NYC and travel across cities.

Both are trying to find luck in their life after several failed attempts to be successful in their careers and in love.Fed up, they both decide to commit suicide by jumping off a bridge. However, both land up on the same bridge at the same time. Ranbir stops Priyanka from jumping and tells her to travel with him to Vegas to make it big.