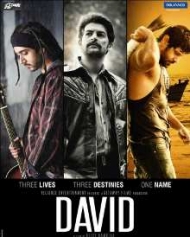 He is a protege who is poised to take over the empire until a revelation which changes the course of his future. 1999 Mumbai- 19 year old David is a musician born into a family of devout Christians.

A happy go lucky teenager who loses all semblance of his peaceful existence when his family gets dragged into a political issue. 2010 Goa - 40 year old David is a fisherman living in the small fishing village of Betul in Goa.

He falls in love with the deaf and mute Roma- the only hitch is that she is engaged to be married to his...