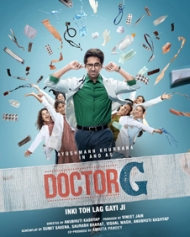 Doctor G, like a medical drama, depicts the journey of an ambitious medical student, "Udaya Gupta." He aspires to be an orthopaedic surgeon. He is, unfortunately, admitted to the gynaecology department. Then he finds himself in the department as a male student. The plot revolves around Udaya Gupta's struggles in a department dominated by women. The film, like a comedy-drama, features comedic characters and events inspired by real life.

The music was composed by Ketan Sodha and Amit Trivedi, and the video was shot by Eeshit Narain and edited by Prerna Saigal. Doctor G is a film directed by Vineet Jain and produced by Usman Shaukat under the banner of Junglee Pictures.

Release Date
Doctor G released in the theatres on October 14, 2022.