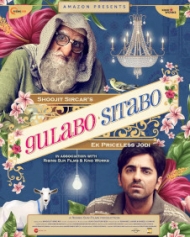 Gulabo Sitabo is a Bollywood quirky family-comedy, helmed by Shoojit Sircar. The movie stars Amitabh Bachchan and Ayushmann Khurrana in the lead roles. The movie has its screenplay written by Juhi Chatturvedi. Gulabo Sitabo will be produced by Ronnie Lahiri and Sheel Kumar.

Mirza (Amitabh Bachchan) is constantly at loggerheads with Baankey Rastogi (Ayushmann Khurrana), who is one of the tenants at his dilapidated haveli, Fatima Mahal in Lucknow. While the rundown mansion belongs to Mirza's wife Begum (Farrukh Jafar), the old man is always scheming to evict Baankey and his clan, since they often avoid paying their measly sum of rent. Mirza tries every trick from his book to get rid of Bankey, but the latter matches him insult by insult and ploy by ploy. However, soon, the duo unknowingly become pawns of a larger game, when their paths cross with Gyanesh Shukla (Vijay Raaz), an official of the archaeological department and Christopher Clarke (Brijendra Kala), a lawyer. Will Mirza's life-long romance with Fatima Mahal be cut short? The rest of the plot holds an answer to that.