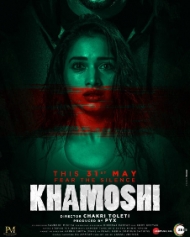 Khamoshi is a 2019 Bollywood supernatural horror film, directed by Chakri Toleti and produced by Vashu Bhagnani. The movie stars Tamannaah, Prabhu Deva and Bhumika Chawla in the lead role. The movie was shot entirely in London.

Khamoshi is a Hindi remake of Nayanthara-starrer Kolaiyuthir Kaalam. The actress will be essaying the role of a character who cannot speak or hear. Prabhudheva will be playing the role of the antagonist. Khamoshi is the first Indian film to be shot with an 8k camera.
Surbhi (Tamannaah), a deaf-and-mute woman was adopted as a kid by a rich lady. After the latter's demise, a grown-up Surbhi decides to donate half of her wealth to an orphanage. Meanwhile, there's a couple, Mr and Mrs Desai (Sanjay Suri and Bhumika Chawla) who seem to be quite upset with Surbhi's decision.
But, a 'good-hearted' Surbhi decides to go ahead with decision, unaware that the night ahead has some 'killer' surprise in store for her in the form of Dev (Prabhudheva), a schizophrenic patient absconding from a mental asylum. With dead bodies soon piling up at the real estate, will Surbhi overpower Dev in this game of hide-and-seek?