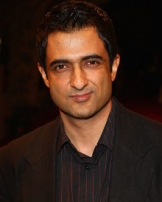 Sanjay Suri was born on April 6, 1971, in Srinagar, Kashmir, where he spent 19 years of his life. He is the youngest of three siblings, having an older brother, named Raj Suri, and sister, Vandana. While living in Srinagar he developed a strong love for nature and the outdoors. As a child Sanjay was a star squash player and was on his school and state teams.

When Sanjay moved to New Delhi in 1990, he was thrust into the world of modelling. He modelled for a large number of companies, including Gillette, Nilkamal Furniture, Times of India and Philishave.

1999 witnessed Sanjay's breakthrough in Bollywood with a supporting role in the movie Pyaar Mein Kabhi Kabhi, co-starring Rinke Khanna and Dino Morea. Although the movie flopped, Sanjay was noticed. With his next films, Daman: A Victim of Marital Violence (2001), Filhaal... and the musical Dil Vil Pyar Vyar (2002) Suri proved his mettle as a fine actor.

In Pinjar, co-starring Urmila Matondkar, he got rave reviews but it wasn't until Jhankaar Beats later that year that he became popular. His role alongside Juhi Chawla was greatly appreciated. Slowly he got more roles in movies but his movies flopped continuously. Despite the failure of his films, his performances continued to be appreciated.

In 2005 he proved all his detractors wrong when he delivered a critically acclaimed performance in My Brother… Nikhil, as a homosexual AIDS victim, once again co-starring Juhi Chawla. The movie received unanimous praise among Indian film critics. The movie fared decently in Mumbai but was a failure elsewhere in India. His succeeding films have not done very well.
Suri along with his wife Ambika, welcomed their first child, a boy in August 2007.