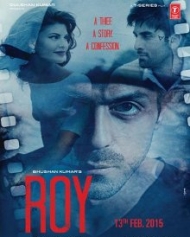 Roy movie is a romantic thriller, in which Ranbir Kapoor plays the role of a thief named Roy. The movie is a love triangle starring Arjun Rampal as a film maker and Jacqueline Fernandez in a double role.

Story in detail:
Roy (Ranbir Kapoor) is a mysterious thief whom nobody seems to be able to get their hands on. Arjun Rampal (Kabir Grewal) plays the role of a successful film-maker and and gorgeous Jacqueline Fernandez interestingly has double roles in the film.

While, Ranbir Kapoor earns money by robbery and he remains untraceable by the police, Arjun Rampal makes a lot of money by making films on the life of Roy, all of which become super-hits at...