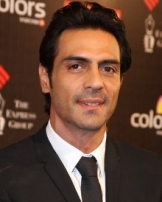 Arjun Rampal is an award-winning Indian actor who appears in Bollywood films, as well as a fashion model.

His debut movie, Moksha was released in 2001 and was directed by Ashok Mehta. However, this film was released after his second film, Pyaar Ishq Aur Mohabbat, in which he appeared with Sunil Shetty and Aftab Shivdasani. Although both films did not perform well at the box office, his performances in both films were lauded by critics. In 2002, he won the award from the International Indian Film Academy for Face of the Year.

In 2006 he made a guest appearance in the multi-starrer Kabhi Alvida Naa Kehna and played a supporting role in Don - The Chase Begins turned out to be a huge hit.