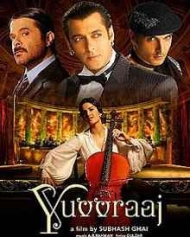 Yuvvraaj is a musical story of a fragmented family of three brothers who try to con each other to inherit their father's wealth, the film is about the arrogance and overconfidence of contemporary youth. Salman Khan is a singer who signs an agreement with his girlfriend Katrina kaif's father to become a billionaire in 40 days.

To acquire this wealth, he has to go through an emotional roller coasterjourney of joy and pain with his two estranged brothers, Anil Kapoor and Zayed Khan who he meets after 12 years. On meeting them, he realizes that they are two individuals who are completely opposite to each other, which makes his task all the more difficult.