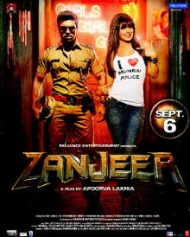 U/A | Action Thriller
Release Date : 06 Sep 2013
Cast : Ram Charan Teja, Priyanka Chopra
Director : Apoorva Lakhia
Synopsis
Zanjeer movie  is a remake of the Hindi 1973 film of the same name. The film revolves around Vijay's struggle against the system, his battle against his inner demons and the his chase after Teja.

Story in detail:
Vijay is a brutally honest police officer who has been transferred yet again by the system for chasing the corrupt underworld goons. He is in charge of a case where the key eye witness [Mala] has seen a murder by [Teja]'s Gang and refuses to co-operate. Teja is the head of an oil mafia operation and doesn't want Ria alive. Vijay manages to convince Ria to give a statement which makes her perpetrators come after her.

He gives her shelter in his house to protect here and soon realizes that she is slowly becoming an important part of his life. He...