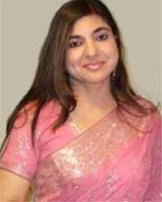 Alka Yagnik is an Indian playback singer. She is noted in Indian cinema for a career spanning over three decades. She is a record seven-time winner from a record of 36 nominations of the Filmfare Award for Best Female Playback Singer, a two-time recipient of the National Film Award as well as several other music awards.

Alka's musical career began at the age of six, while she started rendering devotional songs for Calcutta Radio. She came to Mumbai at the age of 10, along with her mother to try her luck as a child singer. Eminent music directors Kalyanji and Anandji got impressed by her gifted voice. However, they advised her to wait till her voice became mature to become a full-fledged singer. Alka also received the same advice from renowned music composer Laxmikant and decided to wait for three more years.

Alka Yagnik began her Bollywood music career in 1979, with a few lines in Rajashri's Payal Ki Jhankar. Even though her first full - fledged song was 'Hum Tum Rahenge' for Rajesh Roshan in Hamari Bahu Alka, her first release proved to be the super - hit 'Mere Angne Mein'.

In an industry where big and already established names were ruling, it was not easy for anyone to even get noticed. But real talent never goes waste and she finally got her big break after 9 years of her entry through "Ek Do Theen, Char...", in Tezaab (1988). Today, the chart topping songs of Alka Yagnik are a favourite of many.

Alka Yagnik's voice is the sound of many young-generation heroines on the present day. She has done playback singing for many famous actresses like Rakhee, Hema Malini, Farida Jalal, Rekha, Kajol and Preity Zinta. Besides Hindi songs, she has also sung in other languages such as Bengali, Marathi, Tamil, Malayalam, Telugu, and Punjabi.