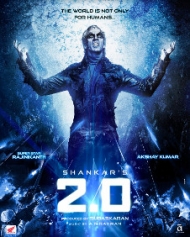 U/A | Sci - Fi
Release Date : 29 Nov 2018
Cast : Rajinikanth, Akshay Kumar
Director : Shankar
Synopsis
Robot 2 aka 2.0 is a 2018 Bollywood Sci-Fi movie, which has been directed by Shankar. The movie stars Rajinikanth, Akshay Kumar and Amy Jackson in the lead roles. The movie depicts, how the scientists help the government to investigate and solve an unsettled case with the help of robots having artificial intelligence. The movie also showcases the good and evil side of robots having artificial intelligence. 2.0 has a brand new story to narrate which has a scientific background. The plot is set in a city where one fine day all the mobile phones start disappearing. People are left in a state of shock after a series of events. It is then that Dr Vaseegaran steps in and the government gets his help in bringing back the robot named Chitti. What happens rest has been narrated in 2.0.
Cast
2.0 (2018): Crew Details
Critics Review
Show More
Songs
Music Director: A R Rahman
News
User Review
WRITE YOUR REVIEW
Show All
In Theaters Now
Upcoming Movies
Bollywood Movies Box Office Collection Updates