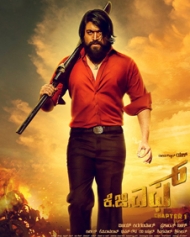 KGF is a period Movie set in the late 70's in KGF written and directed by Ugramm fame Prashanth Neel. In which, Yash will be portray the Rocky Bhai role in this movie. Srinidhi Shetty played the female lead along with Achyuth Kumar, Malavika Avinash, Anant Nag, Vasishta N. Simha, Ayyappa P. Sharma, B Suresh and many others are seen in supporting roles in this movie.

Milk beauty Tamannaah Bhatia made her special appearance in an item number Jokae in this movie. Vijay Kiragandur produced this movie under Hombale Films banner. KGF movie is the most expensive movie ever made in Kannada Film Industry. KGF dubbed into Hindi, Tamil, Telugu, and Malayalam and worlwide released in all languages on December 21st, 2018.

KGF movie deals with mother and son relationship. The movie appears to be set in the backdrop of 1978 while the initial proceeding of the birth of the protagonist happening in 1951.

Yash elopes to the erstwhile Bombay in 1951 and would form to be a tough young man in 1978. The plot of the movie might focus on slavery and domination of certain cadre of people against the poor and downtrodden. The protagonist will ascertain the scene, understand the proceedings and then would stand against the evil to protect the good.