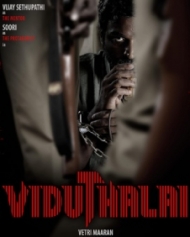 Viduthalai (2022) is a Tamil crime thriller movie directed by Vetrimaaran based on the short story 'Thunaivan' written by Jeyamohan. The movie Viduthalai star cast includes Soori, Vijay Sethupathi and Gautham Vasudev Menon in the lead roles along with Bhavani Sre, Prakash Raj, Chetan. The movie produced by Elred Kumar under the banners of RS Infotainment. The film's soundtrack is composed by Ilaiyaraaja and Viduthalai is the first collabration for Vetrimaaran and Ilaiyaraaja.
The movie story is adapted from short story 'Thunaivan' written by Jeyamohan.