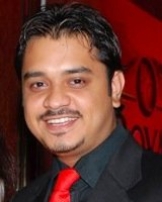 Anuj Gurwara (born June 9, 1981), is an Indian playback singer, radio Jockey, actor, voice-over artist and Master of Ceremonies. He is most popularly known as the singer of the popular song "Panchadara Bomma" from Magadheera.

Anuj comes from a family of educators. His father, Yogendra K Gurwara, and mother, Jyoti Gurwara, are teachers and run a school, Sherwood Public School in Hyderabad, India. The family made Hyderabad their home in 1982. Anuj has one elder brother, Amol Gurwara.

Anuj did his schooling in Sherwood and later, graduated in Psychology and Advertising from Nizam College, Hyderabad. He was an active part of Arts and Music in school and college. Anuj's interests were constantly encouraged and at an early age, he displayed tremendous potential.

Anuj started his career in entertainment as a copywriter. Fresh out of college in 2001, he joined a BPO but that didn't excite him. After quitting in a few months, he worked as a copywriter and Content Developer for various design firms and for a couple of advertising agencies. It was then, that he came in contact with Dramatic Circle Hyderabad, a Hyderabad based theatre group. Having worked in a production with them, Anuj realised that entertainment was what he wanted to do.

In 2009, Anuj debuted as playback singer. Under the music direction of M. M. Keeravani, he sang a song, "Panchadara Bomma", for the Telugu film, Magadheera, which would later emerge one of the highest grossing Telugu films of all time. Along with the success of the film, the song, Panchadara Bomma, grew to be a massive hit and established Anuj as a fresh new voice in the world of music.

S. S. Rajamouli, the director of Magadheera stated in an article - "I opine that Panchadara Bomma is the best song in my career". The song was also declared Top Telugu Song of the year 2009 by various media channels, including newspapers, FM radios and television channels, winning awards across various platforms.

The song "Panchadara Bomma" has singularily generated revenues of over Rs.3,00,00,000 only from mobile phone ringtone downloads, which is said to be a record that no other song in Telugu cinema has created till now.

His latest hits also include "Prapancham Naaventosthunte" from the hit film, Vedam as well as "Yem Sakkagunavro" from Jhummandi Naadam. Both songs have generated good response from all over.

Anuj has been actively performing at various corporate and film-based events after his award-winning singing debut. He performs regularly in and out of Hyderabad. He was also invited to the United States of America by the Bay Area Telugu Association and the Telugu Association of North America. He performed across the United States to packed audiences, Anuj was also invited to Kuwait to perform for audiences there.

Anuj has been an active theatre actor in Hyderabad since 1999, as part of various Theatre productions. He has showcased his talent as an actor and received positive reviews for his performance.

In 2003, while pursuing acting, Anuj got a call from Nagesh Kukunoor for Hyderabad Blues 2: Rearranged Marriage.[24] After this, Anuj auditioned for Sekhar Kammula. Sekhar had won the National Film Award for his directorial debut in Dollar Dreams. He cast Anuj as the 2nd lead for his film Anand, which released in 2004. Anand was a massive hit and Anuj received good reviews for his part.

Anuj made a comeback into cinema after establishing himself as a playback singer. He does a cameo role in S. S. Rajamouli's hit film of 2010 Maryada Ramanna

In 2005, Anuj auditioned for All India Radio, just to give it a shot. He was selected and started hosting music-based shows on Yuvavani. Following All India Radio, Anuj worked for Radio Biryani, a private radio program setup that aired on the AIR frequency. That year, Anuj was awarded Best RJ (Hindi) for his show, Naach Meri Jaan.

Anuj's joined Radio City 91.1 FM in 2006. The station was setting up in Hyderabad, one of the first private FM stations in the city.[32] Anuj began hosting an evening drive time show, Recharge, six days a week, from 8 pm to 11 pm. He played popular Hindi music and maintained high energy, wit and humor throughout the three hours. The show was a hit right in its early days. It struck a chord with the evening listenership that would drive back from work, and as Anuj would say, "recharge" their batteries on their way home. Anuj enjoyed immense popularity through the show. The name stuck with him and he is fondly called RJ "Recharge" Anuj to this day.

Anuj shifted to the 5–9 pm time slot after a year, yet, commanded a dedicated listenership in Hyderabad. Owing to his personal connect and popularity with listeners, he was awarded "No.1 RJ across All-India Radio City" for the year 2006-07. Anuj was soon shifted to the morning show, The Radio City Breakfast Show, from 7 am to 11 am, where he, with Shraddha, gave a fun and energetic start to the day. The chirpy, positive and friendly banter between them had Hyderabad tuned in every morning. It was in February 2008 that Anuj was awarded "India's Best Radio Host for 2007-08" in a nationwide search. Anuj quit Radio City in July 2008, after the station changed its language mix to a more regional sound.

In February 2006, Anuj became a VJ with SS Music. He won the VJ Factor 2, a hunt for VJs in South India. Out of about 5000 people who competed, Anuj was one of the four winners. It was a short-lived role as Anuj got an opportunity in Radio City, Hyderabad soon after.
Voice Acting

Anuj also works as a freelance Voice Over Artist and script writer, for various ad films, radio spots, documentaries, films, training modules and e-learning projects. In 2009, Anuj became part of India's first ever PlayStation 2 game, Hanuman, as the voice of Hanuman in Hindi and English.
Master of Ceremonies / Compere

Being an RJ and an actor, Anuj diversified himself as an MC. From hosting formal events to large parties and concerts, Anuj has established himself as one of the most popular Master of Ceremonies in Hyderabad. He has hosted events, big and small, for a large number of corporate companies and Event Managers.

Anuj's understanding of the pulse of an event, appropriate sense of humor, smooth integration of various elements, personalised involvement with the crowd and respect to the theme of the event, has made him a preferred MC for various kinds of events.