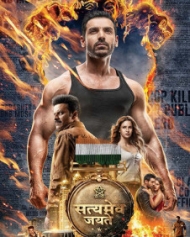 Inspector Adi (John Abraham) is on a mission to fight against the corrupted police officials, when a series of unfortunate incidents take place in his life. Things become complicated to Adi when DCP Shivansh (Manoj Bajpayee) takes in charge and starts a major crackdown on him.

Satyameva Jayate is produced by Bhushan Kumar and Nikkhil Advani under the banner T-Series Films & Emmay Entertainment. The movie has its cinematography done by Nigam Bomzan.