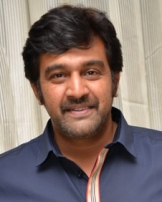 Chiru was born in Bangalore. He completed his schooling in Baldwin Boys High School, Banglore. Graduated from Vijaya College, Bangalore. He worked as an Assistant Director with his uncle Arjun Sarja for about 4 years. He made his debut in the Kannada movie Vayuputra in the lead role. Chiru Sarja's younger brother Dhruva Sarja also leading actor in Sandalwood

Chiranjeevi Sarja died on 7th, June 2020 due to heart attack in Sagar Hospital Bangalore. He was 39 years old.