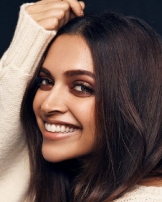 Deepika Padukone is an Indian actress and a former model. Padukone made her acting debut with the 2006 Kannada film Aishwarya. The following year, she made her Hindi film debut with the blockbuster Om Shanti Om which earned her the Filmfare Best Female Debut Award.

Padukone was born in Copenhagen, Denmark. Her family moved to Bangalore, India, when she was eleven months old. Padukone is of Mangalorean origin, and her mother tongue is Konkani. Her lineage hails from Padukone village in Kundapura Taluk in the Udupi District of the state of Karnataka, India.

Her father, Prakash Padukone, is a retired badminton player of international repute, and her mother is a travel agent. Padukone also has a younger sister, Anisha, born on February 2, 1991.

Padukone attended Sophia High School in Bangalore, and completed her pre-university studies at Mount Carmel College in Bangalore. While in high school she played badminton at the state level. However, she was not keen on pursuing a career as a badminton player.

While in college, Padukone pursued a career in modelling. She was spotted in a ramp competition in NLS, Bangalore. Over the years, she has modelled for such Indian brand names as Liril, Dabur Lal powder, Close-Up toothpaste and Limca, and has been the "brand ambassador" for the Jewels of India retail jewellery show. The cosmetics company Maybelline made her its international spokesperson.

Deepika got her formal acting training from the Anupam Kher School of Acting where she was one of the most dedicated students. After pursuing a successful career in modelling, Padukone branched out into acting. She started by starring in the music video for the song Naam Hai Tera from the independent pop album Aap Kaa Surroor by Himesh Reshammiya.

In 2006, Padukone made her cinematic debut in the Kannada film Aishwarya starring opposite actor Upendra. She later made a successful Bollywood debut in 2007 with Farah Khan's international hit Om Shanti Om opposite Shahrukh Khan. Her performance was well received, earning the actress a Filmfare Best Female Debut Award as well as her first Filmfare Best Actress nomination.

Taran Adarsh from indiaFM noted, "Deepika has all it takes to be a top star — the personality, the looks and yes, she's supremely talented too. Standing in the same frame as SRK and getting it right is no small achievement. She comes as a whiff of fresh air!"

Padukone was then seen in Siddharth Anand's romantic comedy Bachna Ae Haseeno opposite Ranbir Kapoor and alongside Bipasha Basu and Minissha Lamba.

The film, which released on 15 August 2008, performed reasonably well at the box office. Her next film Chandni Chowk To China, released on 16 January 2009, and was a critical and commercial disaster. Padukone's fourth release Love Aaj Kal, released on 31 July 2009 and proved to be one of the biggest hits of 2009.

In March 2008, Padukone began dating Ranbir Kapoor, her co-star from the film Bachna Ae Haseeno (2008). The couple broke up in November 2009. She is currently in a relationship with Ranveer Singh. Later, she dated her co-star Ranveer Singh and on November 14, 2018, the couple tied the knot at Lake Como, Italy, in a traditional Konkani & Sindhi ceremony.