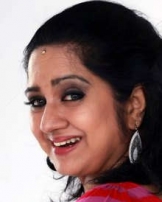 Kalpana Ranjani, mononymously known as Kalpana, is an Indian actress known for her comic roles in South Indian film industries and more particularly in Malayalam cinema. At the 60th National Film Awards, she won the Best Supporting Actress award for her performance in Thanichalla Njan (2012).

Kalpana is the sister of film actresses Urvashi and Kalaranjini. Kalpana entered the film industry wanting to work as a heroine. However, she ended up doing comedy. Kalpana has strayed into reality shows and says she thoroughly enjoys them.

Kalpana passed away on 25/01/2015 at Hyderabad Appollo Hospital.