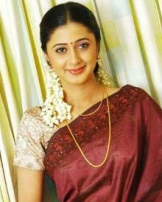 Divya Venkatasubramaniam, best known by her stage name Kanika, is an Indian film actress, occasional dubbing artist, playback singer, and TV anchor. Making her debut in the 2002 Tamil film Five Star, she went on to work in other South Indian film industries, including Telugu, Malayalam and Kannada, as well.

She is perhaps best known for her performances as Eashwari in her debut film Five Star, Gayathri in Varalaru - History of Godfather and Thenmozhi in Autograph. She is currently making waves in the Malayalam film industry with back to back successful films Bhagyadevatha and Pazhassi Raja

Childhood
Divya was born in Madurai, Tamil Nadu, India as the second daughter to Mr. and Mrs. Venkat Subramanian, both engineers. She grew up in a typical Tamil Brahmin household in the suburbs of Madurai. She studied at TVS Matriculation Higher Secondary School, Madurai and was a good student with quite a few accolades including the Tamil Nadu State Award for Educational Excellence in 1999.

She then got admitted on merit to BITS ("Birla Institute of Technology and Science"), in Pilani, Rajasthan, from where she graduated with a Mechanical Engineering degree.

Having developed her singing talents from her childhood, by participating in pop music and light music shows, Divya was interested in singing and related performing arts.

Miss Chennai Second Runner-up
While she was still studying, she gave stage performances as a pop singer from time to time. When she was supposed to perform at the Miss Chennai event, a beauty pageant contest, in 2001, she was asked and finally persuaded to participate at the contest because of her height, after a model had backed out. Her tall figure worked to her advantage. Despite lack of experience, she emerged as the second runner-up at that contest, which would later pave her the way for a film career.

Early career
It was director Susi Ganesan, who spotted her from a magazine cover page, insisted on her performing the lead female role in his second feature film. Divya eventually entered the Film industry, accepting the offer, while her name was changed to Kaniha. Her debut film was the Mani Ratnam-produced Five Star (2002) with Prasanna, who made his acting debut as well, in which Kaniha portrayed a traditional village girl. She completed the entire film during her summer hoilday, since she was till going to college then.

A Break
Kanika knew her priorities very well and shunned all the offers to complete her graduation. The fact she rejected offers from people like Shankar, P.C. Sreeram, Cheran etc to pursue her studies raised the eyebrows of many Kollywood onlookers. Even before she finished her graduation, she completed her Telugu debut film Ottessi Chepputunna during her vacations.

Versatile Actress
After meritoriously completing her studies, Kanika decided to give herself a go at the Tinsel towns. She gave a good account of herself in the 2004 Kannada film Annavaru, a remake of Mani Ratnam's 1991 Tamil film Thalapathi, stepping into Kannada filmdom, too,following which she played a neat, cameo role in Cheran's Autograph, earning critical acclaim.

To prove her versatility with all genres of cinema, Kanika then appeared in a comedy oriented role in the commercial film Aethiree along with Madhavan, Sada, which was directed by K. S. Ravikumar and in which she portrayed a naughty Brahmin girl. When no heroine was willing to pair with the one legged wonder hero Kutty for the film Dancer, Kanika gladly accepted the offer and did a neat job.

She came back to Telugu filmdom, accepting to reprise her role in the Telugu remake of Autograph, Naa Autograph, playing the same role as in the original version. She proved to be an actress to reckon with in the Kannada film Sye, a remake of Tamil film Dhill. She then ventured into Malayalam cinema as the heroine for the campus-based film Ennitum.

Later in 2006 then, her perhaps most famous film, Varalaru, directed again by K. S. Ravikumar, in which she shared screen space with Ajith Kumar and Asin Thottumkal, got released, winning her a lot of applause and acclaim for her role as a mentally disorded girl. After a two-years gap, her most recent Kannada film Rajakumari opposite Ravichandran got released, in which she again got to play the female lead role.

After her marriage, when she was supposed to have bid adieu to the film industry, Kaniha returned to the Malayalam cinema in 2009, with the films Bhagyadevatha, directed by veteran Sathyan Anthikkad and starring Jayaram and Narain as well, and Pazhassi Raja, directed by reputed director Hariharan and starring Mammootty, Sarath Kumar and Padmapriya among others.

Other work
Besides acting, Kanika has ventured into other fields as well, working as a dubbing artiste, playback singer and TV host, proving to be a versatile and talented person.

TV Shows
Even at the prime of her career, Kanika moved to "small screen", hosting a couple of TV shows, which she believes is a refreshing change from movies. She had first hosted the second season of the popular comedy show Kalakka Povathu Yaaru on STAR Vijay in 2006, following which she had hosted the popular family based game show Mega Thanga Vettai, the annual Chutti Vikatan Children's Quiz Show both on Sun TV. Besides, she also essayed a lead role in the television serial Thiruvilayadal on Sun TV.

Dubbing and Singing
Kanika's sweet voice and perfect Tamil pronunciation made possible her venture into playback singing and dubbing. Having a vast experience and being a professional singer before turning actress, Kanika got the offer to sing the theme song of her debut film Five Star.She then turned dubbing artiste, dubbing for actresses Genelia D'Souza in Sachein, Sadha in Anniyan and Shriya Saran in Sivaji: The Boss, whereas the latter two film were S. Shankar's films.

Kanika once stated, that she probably got the offer to dub for Sadha and Shriya in Anniyan and Sivaji, respectively, who both played the roles of Brahmin girls in the films, because Shankar liked her accent, she used in the film Aethiree, in which she herself played the role of a Brahmin girl.

Marriage
On 15 June 2008, Kanika entered married life, by wedding Shyam Radhakrishnan, a US-based software engineer and brother of former actress Jaishree Chandrasekar. She, at first, decided to leave the film industry, finishing her career as an actress, and to settle down in the US, stating that she, however, would complete her hitherto signed movies. In January 2009 then, Kanika, unexpectedly, announced her comeback with the Sathyan Anthikkad-directed Malayalam film Bhagyadevatha.

Advertisements
Kanika has also featured in print and TV ads of some reputed corporates. Some of them are The Chennai Silks, Kalyan Sarees and Jewellers, Rathna Thanga Maligai, Tata Gold Plus, SPP Silks, Erode, Aachi Masala