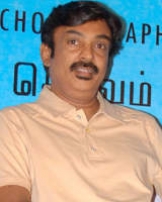 Mohan is a popular Tamil/Telugu/Hindi/Malayalam actor. He is a top 10 actor in the history of Indian cinema.

As a kid, Mohan grew up in I.T.I colony Dooravaninagar, Bangalore. He completed his studies from Bangalore. Mohan was called in the industry as the 'silver jubilee hero' in the 1980s for almost all movies featuring the actor that witnessed a fantastic run. His nick-name in popular circles is 'Mic' Mohan, owing to the fact that he's performed on the stage as a musician and all of his movies had a scene in which he performed with a hand-held microphone in his hand.

He holds the record in the industry for giving 25 silver jubilee hits, a feat not matched by many industry greats. However, Mohan disappeared from the filmdom by the late 1980s following a series of flops. Although his debut was "kokila", a Kannada film directed by veteran Balu Mahendra, his first Tamil appearance was Moodu Pani (a guest role).

This was followed by Nenjathai Killaadhey, a masterpiece of director Mahendran, which started the short yet a full scale peak career of Mohan that lasted for almost 8 years. Nenjathai Killaadhey ran for a year and won best cinematography national award for Balu Mahendra, after which his films began to be either silver jubilee or over 200 days most of the time.

He was best known for his stage singer roles and people had a general thought that he was not versatile. At the peak of his career, he was not afraid to take up challenging negative roles in films like Nooravadhu Naal and Vidhi (both were blockbusters in 1984) and comedies like Sahadevan Mahadevan and Rettai Vaal Kuruvi (likewise blockbusters).

Mohan played a major role in the lifetime of production company Motherland Pictures and its producer Kovaithambi. Mouna Ragam is most likely his best performance which won National Award for Best Tamil Film and started the career of now famous director Mani Ratnam.

Almost all his films were good musical albums (thanks to Maestro Ilayaraja), which feature songs that are still remembered after 25 years. Mohan is still talked about every time a conversation springs up for 80s films or Ilayaraja's songs.

He tried hard to stage a comeback by producing, directing besides playing the lead role in a movie titled Anbulla Kadhalukku. Unfortunately, his bad luck continued and the movie disappeared from the box office without any trace. He took a new avatar as the producer of tele-serials and managed successfully to come out with a serial in a prominent Tamil satellite channel Sun TV.

He declined to do the role of Jayam Ravi's father in Unakkum Enakkum, which was later played by K. Bhagyaraj. Mohan again played the hero after a hiatus of 9 years in "Sutta Pazham" released in 2008. The film was a low budget fare which helped the producer and distributors enjoy the profit.

Mohan's Civic Cinema has already produced Thalappavu, the Prithviraj-Lal starrer, the debut directorial venture of popular actor Madhupal, can be called a historical film, as the movie is based on the controversial and real-life confession of police constable Raveendran Pillai who gunned down the naxalite leader Varghese in a fake encounter on February 18, 1970, in the jungles of Wayanad in North Kerala.

This Malayalam movie is presented in the form of the scattered memories of an old repentant retired police constable and offers to be a promising watch with wonderful performances all through.