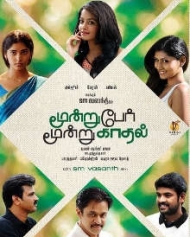 Moondru Per Moondru Kaadhal was not a hyped flick, but the film boosted a well-known director and cast.

Well, has the film lived up to audience expectations? Has the month begin with a hat-trick? Continue reading below to know it... Moondru Per Moondru Kaadhal is a romantic film directed by Vasanth. It is a comeback film for the director after a gap of six years.
It has to be noted that Vasanth's movies have often generated curiosity for content and characterization. Even his last film, which did not keep the cash register ringing, was praised for the same. Now, he has roped in Arjun Sarja, Cheran, Vimal, Muktha Bhanu, Surveen Chawla and Lasini to play the lead roles in Moondru Per Moondru Kadal. What the film has to offer? Will it give a good break to the director?