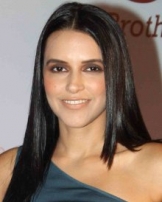 Neha Dhupia is an Indian actress and model who appears in Bollywood films. She is a former beauty queen and winner of Femina Miss India 2002.

Dhupia was born into a Punjabi Hindu family. Her father was Commander Pradip Dhupia, who served in the Indian Navy and mother is Manpinder. She went to Naval Public School and then to Army Public School, Dhaula Kuan, New Delhi. She completed her graduation in History (Hons) from Jesus and Mary College, Delhi University.

Dhupia started her career with a play in New Delhi called Graffiti. Thereafter, she featured in a music video for the Indipop band Euphoria. She modelled for advertisement campaigns. She acted in the TV serial "Rajdhani". She featured in a song with Ginuwine & Shayal called "Baby". She entered the Femina Miss India pageant in 2002 and came first, winning the Femina Miss India Universe title and was subsequently sent to participate in the Miss Universe 2002 pageant in Puerto Rico. She was placed in the top 10.

She began appearing in Bollywood films starting with Qayamat: City Under Threat (2003), a box office success. She rose to popularity with her role in the film Julie. She portrayed the dual role of twin sisters in Sheesha (2005) which did not do well at the box office.
She has appeared in films such as Kyaa Kool Hai Hum (2005) and Shootout at Lokhandwala (2007) which did well at the box office and also appeared in a segment of the anthology film Dus Kahaniyaan (2007). Neha Dhupia made one of the actors in the film wash his hands five times as she had to lick the hand in the scene for Dus Kahaniyaan.