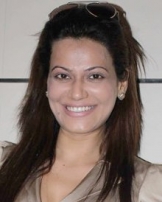 Payal Rohatgi is an Indian actress and reality TV performer who appears in Bollywood films. She was a contestant in the reality show Bigg Boss in 2008.

Payal Rohatgi was born on November 9, 1980 in Banjara Hills, Hyderabad, India. She is the daughter of Veena Rohatgi and Shashank Rohatgi. She has a brother named Gaurav Rohatgi. She was brought up in a middle class family and grew up in Ahmedabad in Gujarat.

She is a computer engineer from L.D. College of Engineering, Ahmedabad by profession. Payal studied in Udgam School.

Payal Rohatgi won the title of Miss Tourism World in 2001, against candidates from 65 countries. She was also a finalist at the Femina Miss India contest in 2000. These successes encouraged Payal to enter the entertainment industry and so she moved to Mumbai. She is approximately 5' 6" tall, and her star-sign is Scorpio.

She started her career by modelling for popular brands like Amul, Nirma, and Nescafe. She gained attention after appearing in a television ad for Cadbury's Temptations Chocolates. Around this time she also appeared in music videos by rock band Silk Route and Indipop artist Kay Kay.

After her career in Bollywood took off, Payal cut back on the number of products she endorses. However, she appeared along with cricketer Virender Sehwag in an ad film for Dabur's Lal Dantmanjan. The film was directed by Pradeep Sarkar.

Incidentally, both are somehow related to Vidhu Vinod Chopra as she acted in Munnabhai I and Pardeep Sarkar made Pareeneeta for him. She was also seen in an ad film for Eveready battery with Amitabh Bachchan which was directed by Pradeep Sarkar in 2006.

Payal first appeared in Bollywood performing in Harry Baweja's 2002 Yeh Kya Ho Raha Hai?, a Hindi remake of the Hollywood teen flick American Pie. She appeared in several small-budget films after that, but didn't strike it big until she made her A-grade acting debut in 2006 as one of the lead characters in the Bollywood film 36 China Town.

The movie starred the well-known actors Shahid Kapoor, Kareena Kapoor, and Paresh Rawal. Later that year, she appeared in the critically acclaimed Corporate where, ironically, she played the part of an item girl.

In 2007, she had her first release with Priyadarshan's film Dhol, produced by the Percept Picture Company. She played a positive second lead character, paired opposite Arbaaz Khan.

In 2008, she was seen in a cameo opposite Ranvir Shorey in a PNC film Ugly Aur pagli which was released in August 2008. In mid-September she signed on to another role opposite Irfan Khan in a TV18 film Dil Kabaddi. She played the role of an aerobics instructor and sported a very toned, lean look in the film.