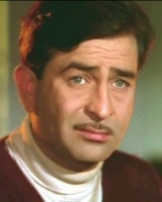 Raj Kapoor or Ranbirraj Kapoor, also known as 'the show-man', was a legendary Indian film actor, producer and director of Hindi films. He was the winner of seven Filmfare Awards and a nominee for the Grand Prize of the 1953 Cannes Film Festival.

Raj Kapoor was born in Peshawar in the North West Frontier Province in British India to Bollywood actor, Prithviraj Kapoor, and Ramsarni (Rama) Devi née Mehra. He was the eldest of the four children in the Hindu Pathan family. He is the grandson of Dewan Basheswarnath Kapoor and great-grandson of Dewan Keshavmal Kapoor, part of the famous Kapoor family.

His younger brothers are the actors Shammi Kapoor and Shashi Kapoor. He also had a sister by name Urmila Sial.

Raj Kapoor began his career as a clapper boy assisting Kidar Sharma at a film studio. At age eleven, he appeared in films for the first time, in the 1935 film Inquilab. After acting in several other films the next 12 years, Raj Kapoor's big break came with the lead role in Neel Kamal (1947) opposite Madhubala in her first role as a leading lady.

In 1948, at the age of twenty-four, he established his own studio, R. K. Films, and became the youngest film director of his time. His first movie as a producer, director and star was the 1948 film Aag, which was also the first of his many films with actress Nargis. However, the film failed to do well at the box office. In 1949, he once again starred alongside Nargis and Dilip Kumar in Mehboob Khan's classic blockbuster Andaz that was his first major success as an actor.

He went on to produce, direct and star in many box-office hits such as Barsaat (1949), Awaara (1951), Shree 420 (1955), Chori Chori (1956) and Jis Desh Mein Ganga Behti Hai (1960). These films established his screen image as The Tramp modeled on Charlie Chaplin's most famous screen persona. In 1964, he produced, directed and starred in Sangam, which was his first film in colour.

This was his last major success as a leading actor. He moved onto directing and starring in his ambitious 1970 film, Mera Naam Joker (My name is Joker), which took more than six years to complete. The film was said to be loosely based on his own life. When released in 1970, it was however a box-office disaster, putting him into a financial crisis. Despite this setback, the film was much later acknowledged as a misunderstood classic and Raj himself regarded this film as his favourite.

He bounced back in 1971 when he co-starred with his eldest son Randhir Kapoor in Randhir's acting and directorial debut Kal Aaj Aur Kal (1971), which also starred Raj's father Prithviraj Kapoor as well as Randhir's then wife-to-be Babita. From then on, he acted in films as a character actor and focused on producing and directing films.

He launched his second eldest son Rishi Kapoor's career when he produced and directed Bobby (1973), which was not only a huge box-office success but also introduced actress Dimple Kapadia, later a very popular actress, and was the first of a new generation of teen romances. Dimple wore bikinis in the film which was quite unique for Indian films back then.

In the later half of the 1970s and early 1980s, he produced and directed films which focused on the female protagonists: Satyam Shivam Sundaram (1978) with Zeenat Aman, Prem Rog (1982) with Padmini Kolhapure and Ram Teri Ganga Maili (1985) which introduced Mandakini.

Raj Kapoor suffered from asthma in his later years; he died of complications related to asthma in 1988, at sixty-three years of age. At the time of his death, he was working on the movie Henna (an Indo-Pakistani love story). The film was later completed by his son Randhir Kapoor and released in 1991 going onto become a huge success.

Raj Kapoor is appreciated both by film critics and ordinary film fans. Film historians and movie buffs speak of him as the "Charlie Chaplin of Indian cinema," since he often portrayed a tramp-like figure, who, despite adversity, was still cheerful and honest. His fame spread worldwide. He was adored by audiences in large parts of Africa, the Middle East, the former Soviet Union, China, and Southeast Asia; his movies were global commercial successes.

Many of Raj Kapoor's movies had a patriotic theme. His films Aag, Shree 420 and Jis Desh Mein Ganga Behti Hai (In the Country Where the Ganges Flows) celebrated the newly independent India, and encouraged film-goers to be patriots. Raj Kapoor commissioned the famous lyrics for "Mera Joota Hai Japani," a song from the movie Shree 420.

Raj Kapoor was a canny judge of filmi music and lyrics. Many of the songs he commissioned are evergreen hits. He introduced the music directors Shankar Jaikishan and the lyricist Hasrat Jaipuri. He is also remembered for his strong sense of visual style. He used striking visual compositions, elaborate sets, and dramatic lighting to complete the mood set by the music. He introduced the actors Nimmi, Dimple Kapadia, and Mandakini, as well as launching and reviving the careers of his sons Rishi and Rajiv. Raj Kapoor was a great actor in Bollywood.

The Kapoor family hailed from what is now Faisalabad (then called Lyallpur) in the Punjab province of present-day Pakistan.

In 1946, at 22, Raj Kapoor married Krishna Malhotra belonging to Jabalpur, in a traditional family-arranged wedding. Krishna was a distant relative, his father's maternal uncle's daughter. Her brothers Prem Nath as well as Rajindernath were also actors.

Kapoor is also known to have had a longtime romantic relationship with the renowned actress Nargis during the 1950s. The couple starred in several films together, including Awaara and Shree 420. He is also alleged to have had an affair with Vyjayanthimala, his co-star in Sangam.