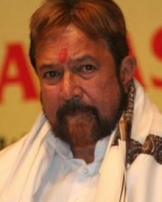 Rajesh Khanna was an Indian Bollywood thespian and laureate on whom the Dada Saheb Phalke Legend Golden Actor Award was bestowed in 2008 and IIFA 2009 Life Time Achievement Award on June 13, 2009, besides a large number of other national and international awards of repute, both Life Time Achievement awards and other high profile awards.

He has also served a five year tenure as an MP in the Indian parliament (1991–1996). Also known as Kaka or affectionately called just "RK", he has been for the first time officially termed as "the Superstar of the Indian film industry".

Jatin Khanna, a Punjabi, was born in Amritsar on 29 December 1942, and was adopted by parents who already had three daughters of their own.

In the late 1960s, Khanna dated Anju Mahendru. The couple eventually drifted apart, and split in the early 1970s. He married Dimple Kapadia, a Gujarati, in 1973 and has two daughters from the marriage. Khanna and Dimple Kapadia separated in 1984, as his schedule kept him away much of the time and she became interested in pursuing an acting career.

After the separation, he was romantically involved with Tina Munim for a period of time. Following a few years of separation, the relationship between Kapadia and Khanna blossomed once again, and remained that of close friends.

Rajesh Khanna joined the film industry after winning an All India Talent Contest through a nationwide selection procedure. He made his film debut in the 1966 film Aakhri Khat, followed by Raaz opposite heroine Babita, but neither was a major success. He was noticed for his performance in his next film Baharon Ke Sapne followed by box office successes like Aurat (1967), Khamoshi, and Aradhana (1969) which were more successful at the box office.

Established as a popular protagonist, he appeared in many romantic, melodramatic and social films, often appearing with the same actresses - such as Sharmila Tagore, Mumtaz, Hema Malini and Asha Parekh.

During the peak of his career, he would be mobbed during public appearances. Fans kissed his car, which would be covered with lipstick marks, and lined the road, cheering and chanting his name. Female fans sent him letters written in their own blood.

Several of the popular songs sung by Kishore Kumar in the 1970s were based on Khanna and were mostly composed by R.D.Burman.

Post 1976, Khanna had a string of box office flops, including Aaina and Mehbooba. Media reports in the late seventies suggested that success had perhaps caused Khanna to be complacent, often turning up late for shoots and throwing tantrums, as well as having a whole entourage of sycophants accompany him for his shoots.

This behaviour coupled with the changing trend from romantic and social movies to action oriented multi-star films in the late 1970s and early 1980s caused the decline of Khanna's career in terms of box office ratings.

He shared a very close relationship with R.D.Burman and Kishore Kumar. The trio, who had a great working relationship, were very close friends and have worked together in more than thirty films. Several actors who were part of the cast of most of his films included Sujith Kumar, Prem Chopra, Madan Puri, Asrani, Bindu, Vijay Arora and A K Hangal, who remained part of his "team" until the late eighties.

From the early nineties onwards he stopped acting and served as an M.P. of New Delhi Constituency from 1991 to 1996. During that period, he returned to acting, appearing in Khudai (1994). He made a come back as an NRI in Aa Ab Laut Chalen (1999) and Kyaa Dil Ne Kahaa (2002). In September 2007, he officially announced his planned return to the big screen, signing a contract for several new films, including some T.V. serials.