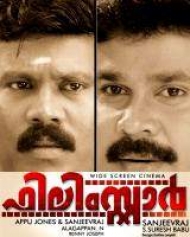 Film Star is an upcoming malayalam movie directed by Sanjeev Raj. The high lite of the movie is Dileep and Kalabhavan Mani coming together after a long time. The movie telling of the relationship between a film star and a Villager. Certain incidents happen in their lives, which bring the duo close to each other.

Kalabhavan Mani is appearing super star Sooryakiran and Dileep is playing Nandhagopan he is a script writer in this movie. Nandhan is the son of local communist leader Daivam Gopalan