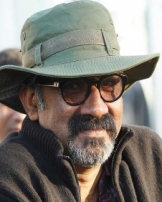 Ranjith is one of the most successful screenwriter and film directors in Malayalam cinema. He is most famous for scripting films such as Devasuram, Aaram Thamburan and Narashimham. His directional debut was Ravanaprabhu, the sequel to Devasuram, in 2001. His other films include Nandanam, Mizhi Randilum, Black, Kaiyoppu, and Thirakkatha.

Ranjith graduated from the School of Drama in 1985. Two years later, his first Malayalam film was released called Oru May Masapulariryil. After that, he worked in a lot of films with directors like Kamal, Shaji Kailas, Sibi Malayil, Viji Thampi, etc. But when he wrote the script for Devasuram, it brought about a new trend in Malayalam cinema and the audience experienced a new face of heroism.

Mangalasherry Neelakantan, the hero of Devasuram still remains vividly in the minds and hearts of the Malayalis. Mohanlal, one of the most gifted actors in Indian cinema, made this character remarkable on celluloid. After the success of Devasuram, he joined hands with Shaji Kailas and Mohanlal to produce films like Aaram Thampuran and Narasimham.

Both these movies went on to become mega hits. Narasimham broke all the collection records. The script of Aaram Thamburan remains as one of the best film scripts in Malayalam cinema. Renjith's script, Shaji Kailas's direction and Mohanlal’s acting made the movie a super duper hit!!

This film satisfied the rules of commercial and art cinema. He acted in a movie named Gulmohar after a long time. He tried his acting skills again in that movie with Meenu Mathew, who was a newcomer then.